This project included the total reconstruction of Step Street and Retaining Wall between Clay and Teller Avenues in the Bronx.  Construction began in spring 2015, however, the unknown condition of the underlying base of the structure became the cause of delays to the construction schedule.  Following a complete redesign of the project, the new scope included the complete demolition of all existing foundations and stabilization of the underlying base.

For this step street project, SAE performed pre and post construction building condition survey of the four structures surrounding the step street.  SA Engineering also provided construction instrumentation and monitoring services including an Automated Motorized Total Station, vibration monitors, and noise monitors for the length of the project.  SA engineering was contracted to perform test pit investigations for the existing structure foundation, as well as other investigations to stabilize an existing retaining wall that began to deteriorate during the demolition of the surrounding staircase. 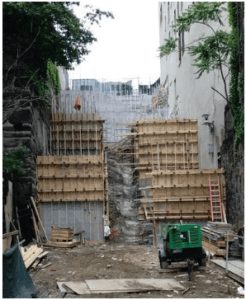